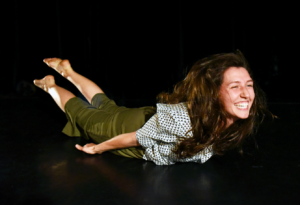 I grew up bilingual and dancing near Munich.

With my best friend I constantly re-enacted Harry Potter and Lord of the Rings. During the summer holidays we made a movie in which a girl runs into a lantern and has a deformed mouth ever since. In 2012 I graduated from high school, then drove to Croatia by car and with a tent. After that I entered a professional training program for Contemporary Dance and Dance Pedagogy in Munich. The advice to do something „gscheids“ (Bavarian expression for choosing a secure profession) came from many sides, so I listened and in 2015 I completed an apprenticeship as a management assistant in marketing communication. Then I followed the urge for freedom and boarded a plane to the USA. There, I learned a lot about politics and social issues within American culture as part of the Fulbright Scholarship Program. I found out that baseball is quite boring and that New York is a fast-living theater play. After 16 hours of sitting on a night bus full of people, I told an airport employee in Toronto what a beautiful presence she has and then got on the plane to LA – to arrive exhausted, overjoyed and without luggage. I moved to Santa Monica and worked as an editor/internship for an online magazine for four months, fell in love with the beach and the freedom and danced wildly at the premiere party of American Horror Story. I did not recognize the „important people“ anyway. Hoping that I kind of got the hang of the American pronunciation, I flew back to Germany in winter. Worked a bit here and there, tried this and that, continued to study media and communication management. Moved in and moved out, danced, played and worked in agencies. After this period of constant change I finally decided: I want to work in the field of theatre and I applied for a master’s degree in Physical Theatre (why do a bachelor’s degree again?!). After the audition and an interview, I got accepted. I packed up all my things again and moved to Ticino (CH). There I met the most amazing people. For two years I felt nothing but joy, love and fun. I practiced acrobatics, object theatre, improvisation, composition, movement, clowning and speaking. More input was given to me than I was able to digest. I gave myself a lot of doubt, but I laughed and grew even more. During my second year I crafted at least over a 100 paper flowers, I dressed up in different ways and finally created and performed the physical theatre piece „PITCH!“. After the premiere in June 2019, I celebrated the summer in Ticino for one week, travelled to Freiburg (D) for taking part in a research on dramaturgy in improvisation, followed by travelling with my performance to festivals in Serbia, Morocco and Budapest.

Currently I am trying to figure things out – like everyone else, I guess.